What we practice today, called Tai Chi, or Taijiquan (Supreme Ultimate Fist) is often thought of as merely an exercise routine imported from China one of the few imports not resulting in the loss of jobs. In fact, Tai Chi began as a method of martial arts combining ancient movement and breathing routines and spiritual meditation. It is concerned with, among other things, the movement through the body of Qi (Chi), which can be translated as "life force" or "energy."  It is said : "The internal energy, c’hi, roots at the feet, then transfers through the legs and is controlled from the waist, moving eventually through the back to the arms and fingertips." (Waysun Liao translation)

Historians of the Taijiquan (Tai Chi) forms credit Chen Chang Xing (1771-1853)  with developing the first  of the publicly taught Tai Chi styles called Old Frame, or Chen style. He taught this Chen Style  to Yang Lu Chan (1799-1872), who then developed what we know as the Yang Style of Taijiquan.  Yang Cheng Fu (1883-1936), the grandson of Yang Lu Chan, popularized a somewhat modified version of the  Yang Style, and this is the form we practice today as the Yang Long Form. Traditionally, it has 108 postures, although there are many variations.

I have read that the Cultural Revolution in China came close to ending the tradition of Tai Chi practice. It would be interesting to research the political upheavals concerned, but that is for another time, another discussion. By 1956, however, the National Physical Culture and Sports Commission of the People's Republic of China undertook to standardize and simplify many versions of Tai Chi, perhaps recognizing the value of exporting Tai Chi as a health and exercise activity. Taijiquan Committee Chairperson, Professor Li Tian Ji  (1914-1996,) led the development of the 24 Taijiquan Form and many other standardized Taijiquan forms such as the 32 Sword Form.  He has been called the father of modern Tai Chi.

The Standard Simplified Beijing 24 Taijiquan Form eliminated some of the movements found in the Yang 108 Long Form, keeping the most essential ones, reducing the number of repetitions of some and "mirroring" others (performing, for example, Grasp the Sparrow's Tail symmetrically to both the right and to the left). Basic principles of Tai Chi are followed, with slow, flowing movements. The form lasts only about 8 minutes, compared to 15 to 20 minutes for the Long Form, is easier to learn and less difficult to perform. The travel is only about 10 feet in a linear direction, making it perfect for large groups in limited spaces. Thus, it has become the most popular and widely practiced form worldwide. 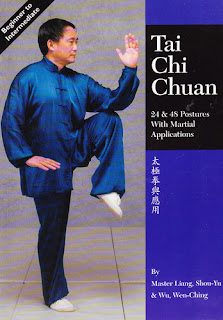 A good companion book for learning the 24 Form while taking a class is "Tai Chi Chuan: 24 & 48 Postures with Martial Applications" by Liang Shou-Yu. Find it at http://www.amazon.com/Tai-Chi-Chuan-Postures-Applications/dp/1886969337/ref=cm_cr_pr_product_top 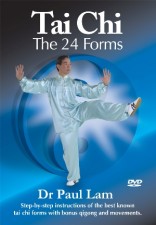 My first investigation into Tai Chi (well, that looks easy...I can do that) resulted in my purchase of a DVD with which I intended to teach myself Tai Chi. That didn't exactly work and I realized early on that taking a class was the proper approach. But the DVD just happened to be Dr. Paul Lam's Tai Chi The 24 Forms, which  I now find is an excellent reference for learning the 24 Form. It is still available on his web site, http://usa.taichiproductions.com/